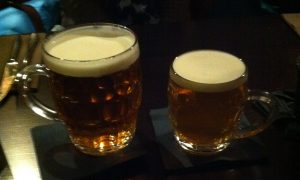 At a pub quiz last week, the quizmaster announced there would be European themed questions to recognise the Euro 2016 tournament and upcoming EU referendum. Brilliant and topical… even though we still came second in the end and missed out on the prize of several free pints!

The quizmaster largely kept politics out of it but still made a few comments in favour of leaving the EU and protecting “British jobs” in particular. Being in favour of remaining in the EU, I had a chat at the end to find out why he favoured leaving and his overriding feeling was that “nothing much would change” even if we left, so why not go it alone.

The conversation was revealing in a couple of ways: 1) Uncertainty and apathy in response to the walls of noise and numbers (both fact and fiction) being presented by individuals or groups who don’t usually have much to do with people’s everyday lives; and 2) A resulting reliance on gut instinct which might ultimately result in a decision to remain based on a sense of inertia or reduced risk, or to leave based on some sense that if there’s no difference, why not “back Britain” on its own. Even where evidence is being presented by organisations that are generally respected as independent and credible, it appears to be getting lost in the overall fog of facts and fiction.

Working in the research profession, evidence-informed decision making is difficult at the best of times for some organisations managing even small projects and policies. Organisations might choose not to use commissioned research findings because they don’t align with other existing plans or because there are numerous other examples of research findings to bear in mind, or due to other intangible strategic or political factors.

The conclusion is perhaps not to be surprised that some UK citizens are uncertain what evidence to trust in the EU referendum and, further, that it is understandable if decision-makers in organisations rely on instinct or a considered personal judgment where numerous examples of evidence are being presented to them. The extent to which this counts as evidence-informed decision making is uncertain, but it reflects the reality facing research commissioners and, at the least, illustrates the importance of researchers reporting study findings as clearly as possible.